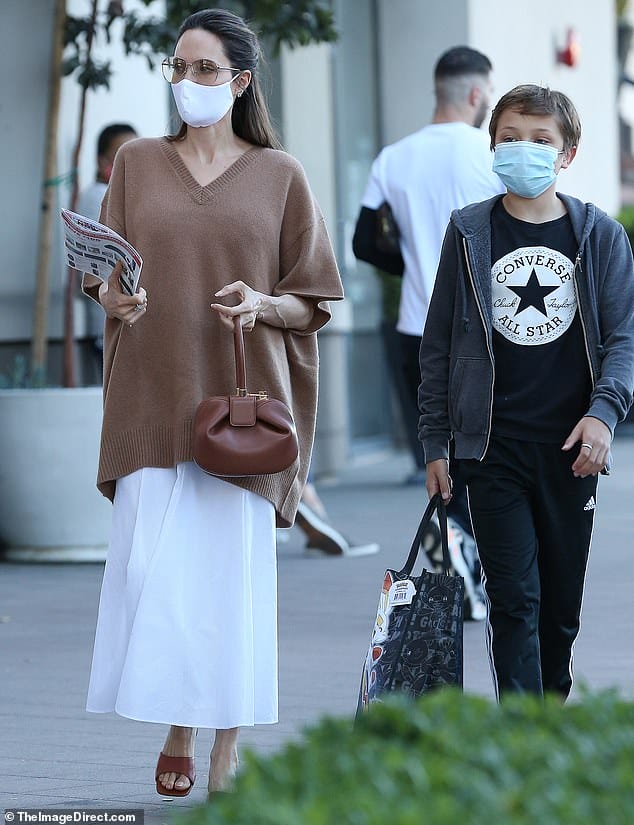 Angelina Jolie was seen outing with her son Knox on Sunday.

The actress was spotted spending a good time with her son Knox. As they went for an outing in LA. They were seen going to a game store followed by a high end boutique.

And it seems like the mother-son duo had a great time. Jolie was wearing an over sized brown sweater, white skirt and brown sandals. As her hairs were pulled back and was seen donning a pair of sunglasses and face marks.

But what grabbed attention was the purse she was carrying. Jolie’s purse had activist and artist Nina Simone’s name engraved in it.

As for Knox he donned a black t-shirt and black adidas track pants. And also white sneakers accompanied by a face mask as a precautionary measure.

Her Quarantine Phase With The Kids

So it is said that Jolie is having really good time with the kids. As it is after a long time that the 35 year old actress has got enough time with her kids.

Moreover her ex husband and father of the six children Brad Pitt has also been staying in LA. Hence she he visits them very frequently. And according to the sources, the kids are having quite a family time.

As the are spending quality time with parents Brad and Jolie. And are also keeping up with their lock down school work.

Apart from that there were also speculations that Jolie and Pitt are thinking of a reconciliation. As Pitt very often visits her house and sometimes even after the kids have gone to sleep.

But nothing is confirmed as of yet. One thing is for sure that Jolie and Pitt are setting up some real parenting goals. And that is because in spite of having so many differences they have ignored it and are trying to be equally available for their kids.